The two-factor theory (also known as Herzberg’s theory of motivation and hygiene and the dual-factor theory) states that there are certain factors at work that cause job satisfaction, and that a separate set of factors causes dissatisfaction, all of which are an independent act from each other. It was developed by the psychologist Frederick Herzberg. This article has a well detailed information on the Herzberg theory of motivation definition, example, pdf and other vital information. 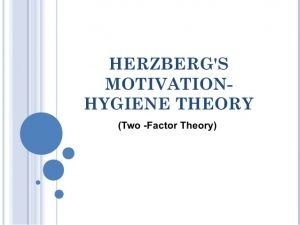 This article will focus on the following:

This Herzberg motivation theory definition, also called motivational hygiene theory or dual factor theory, was written in 1959 by Frederick Herzberg. This American psychologist, who was very interested in people’s motivation and job satisfaction, suggested the theory. He did his research by interviewing a group of people about their good and bad work experiences. He got surprised that the group answered questions about their good experiences differently than about their bad experiences.

According to the Herzberg theory two factor motivation definition, the feelings, attitudes, and their connection to industrial mental health are linked to Abraham Maslow’s theory of motivation. Their results had a significant theoretical and practical impact on management attitudes.

According to Herzberg theory of motivation, individuals not only meet the lower-order needs at work. For example, needs related to minimum wages or safe and pleasant working conditions. Instead, people seek the satisfaction of higher psychological needs that have to do with success, recognition, responsibility, progress, and the type of work itself. This seems to correspond to Maslow’s theory of a hierarchy of needs.

The two-factor theory was developed from data that Herzberg gathered from interviews with 203 engineers and accountants from the Pittsburgh region, selected because of the growing importance of their professions in the business world. Regarding the registration process:

In short, we asked our respondents to describe the periods in their lives when they were extremely happy and dissatisfied with their work. Each respondent provided as many “sequences of events” as possible to meet certain criteria, including a significant change in feelings, a beginning and an ending, and an essential description that contained no feelings and interpretations. The proposed hypothesis appears to be confirmed. The legal factors that have led to satisfaction (performance, intrinsic interest in work, responsibility, and progress) are largely unipolar; That means they contribute very little to job dissatisfaction. Conversely, the unsatisfactory ones (company policies and administrative practices, supervision, interpersonal relationships, working conditions, and salary) contribute very little to job satisfaction. – Herzberg, 1964 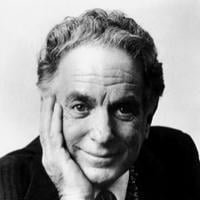 Base of the Herzberg Motivation Theory in Analyzing the interview

In analyzing these interviews, he found that the characteristics of work that are related to what an individual does, that is, the type of work that one does, apparently can meet needs such as success, competition, status, personal value, and self-esteem. Performance that makes him happy and satisfied. However, the lack of such rewarding work characteristics does not appear to lead to dissatisfaction and dissatisfaction. Instead, dissatisfaction results from unfavorable assessments of job-related factors such as company guidelines, supervision, technical problems, wages, interpersonal relationships at work, and working conditions. If management wants to increase job satisfaction, it has to deal with the type of job itself: the opportunities it offers to achieve status, take responsibility, and fulfill yourself. On the other hand, if management wants to reduce dissatisfaction, it needs to focus on the work environment: policies, procedures, monitoring, and working conditions. If management is equally interested in both, managers should consider the two employment factors.

According to Herzberg Two-factor theory of motivation, motivators (for example, challenging work, the recognition of a person’s accomplishments, responsibility, participation in decision-making processes, the opportunity to do something meaningful, the feeling of importance to an organization) that offer positive satisfaction that comes from intrinsic conditions of the job itself, such as recognition, achievement or personal growth. 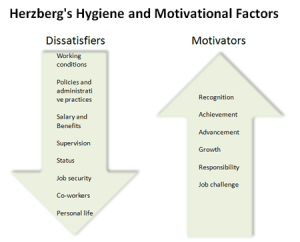 Hygiene factors (e.g., status, salary, job security, benefits, working conditions, good salary, paid insurance, vacation) do not offer positive satisfaction or increase motivation, although dissatisfaction comes from the absence of them. “Hygiene” is used in the sense and context that these are maintenance factors. These are not relevant for the work itself and include aspects such as company guidelines, supervisory practices, or wages.

Herzberg usually referred to hygiene factors as “KITA factors”, which is an acronym for “kick the Ass,” offering incentives or threatening to punish someone for something.

Functions of the Two Factor Theory

Eliminating discontent is only half the job of the two-factor theory. The other half would be increasing job satisfaction. This can be achieved by improving the motivators. Motivation factors are necessary to motivate an employee to perform better. Herzberg also classified our actions and how and why we carry them out. For example, if you take a work-related action because you need to do it, it will be classified as “move.” However, if you take a work-related action because you want to do it, that is classified as “motivation.” Herzberg considered it essential to eliminate job dissatisfaction before creating job satisfaction conditions, as this would work against each other.

Combinations of the Herzberg Motivation Theory

According to wo-Factor Theory of Herzberg, there are four possible combinations:

High hygiene + high motivation: The ideal situation in which employees are highly motivated and have few complaints.

High hygiene + low motivation: The employees have few complaints, but are not very motivated. The work is considered a paycheck.

Low hygiene + high motivation: The employees are motivated but have many complaints. A situation in which work is exciting and difficult, but wages and working conditions do not meet the requirements.

Low hygiene + low motivation: It is the worst situation in which the employees are not motivated and have a lot of complaints.

Unlike Maslow, who offered just a little data to support his ideas, Herzberg and others provided substantial empirical evidence to confirm the theory of motivation and hygiene. However, his work has been criticized for methodological reasons.

The link below contains the pdf of the Herzberg Two-factor theory of motivation: